3 Secret Codes You’ve Got to Try With Your Kids

I live with two aspiring secret agents, who sometimes need to send important cryptic messages to each other. In addition to experimenting with lemon juice as invisible ink, we’ve been having loads of fun trying out various secret codes and ciphers. And as a bonus, playing with secret codes is a great way to sneak some writing into your summer days!

3 Secret Codes to Try With Your Kids Here’s a simple reverse alphabet code to start with. Write the alphabet on your paper, then write it backwards directly underneath your letters. To write your message, look at the top (orange) letters and write the bottom (blue) letters. To decipher it, find the letters on the bottom line, and write the corresponding letters from the top line. My girls loved the pig pen symbol code once they had some time to practice with it. Draw two grids – one like a tic-tac-toe board, and one X. Fill in your letters as shown. Each letter is represented by the lines around it, and the second letter in each space also gets a dot. For example, A looks like a backwards L, and B looks the same but with a dot added.

We practiced writing our names and silly words before moving to coding whole sentences. The messages you write with the pig pen code look very sneaky and secret! A grid secret code is easy to set-up, and is great practice for using coordinates, too. Each letter is represented by a row letter (A-E) and a column number (1-5). Two letters have to share a space – I chose I and J, since they would not be easily confused in a word. We found that grid codes take a little extra time to write, but are quick to solve. We like leaving secret code notes for each other in unusual places – the bathroom mirror, under a pillow, in the freezer, at the bottom of the slide. I also use them to surprise the girls with spur-of-the-moment park outings or ice cream dates.

Another fun way to play with codes is to set up a scavenger hunt. This takes a little bit more planning and time, but is a great way to spend a hot afternoon inside. Have the last clue lead to a cool treat, a midday bath, or a special movie. Use different codes on each clue to keep your kids on their toes!

A secret code notebook can be a fun way to communicate with your child. Write the code keys inside the front cover, then take turns asking questions, writing notes of encouragement, or telling jokes – all in code!

Amy is happiest surrounded by her husband, her three amazing kids, stacks of books, and craft supplies. With a background in psychology, early childhood education, and elementary teaching, Amy is a supporter of playing dress-up, digging in the dirt, and squeezing out puddles of glue. At her blog, Let’s Explore, Amy shares her family’s experiences creating, imagining, and playing together. 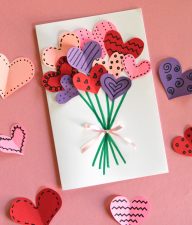 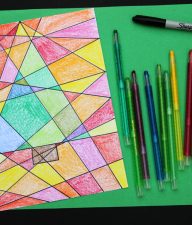 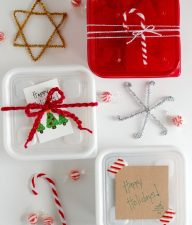 With the Kids Watercolor Place Cards for Thanksgiving 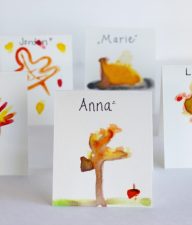 With the Kids Bouquet of Hearts Card for Valentine’s Day