Competing in the Olympig! with Toddler Approved

Hi there, I’m Kristina from Toddler Approved! I am so excited to share one of our new favorite Olympic books with you today along with a simple catapult activity that has provided hours of fun for my kids. 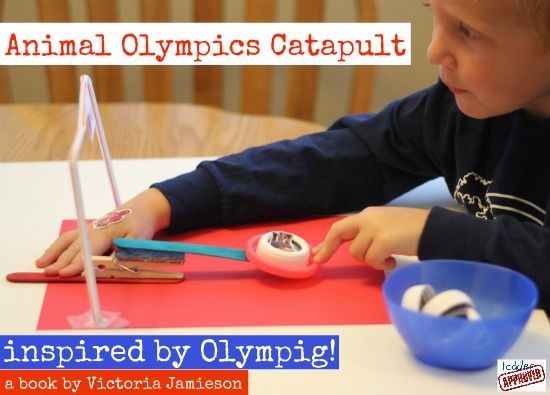 Competing in the Olympig! with Toddler Approved

We have been celebrating the Olympics with loads of activities over the past few weeks as part of a weekly Camp Mom that I’ve been hosting with friends. One of the books that we recently discovered was Olympig! by Victoria Jamieson. 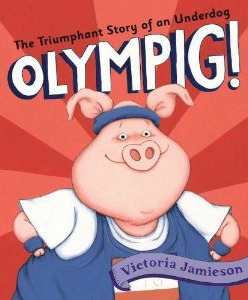 Olympig! is a darling story about a pig named Boomer who is participating in the Animal Olympics. Boomer definitely isn’t the fastest or strongest at the games, but he sure does try the hardest! The story has a great message about trying hard even when things are tough and you aren’t winning. The illustrations and humorous details in the story make it one that kids of a variety of ages will enjoy.

Inspired by Boomer’s catastrophic participation in the high jump (among other events), my son and I decided to try out a project that we’ve been wanting to make for awhile… a catapult. We figured that a catapult was the perfect way to help Boomer actually make it over the high jump.

We pinned this great catapult post by Julie at Creekside Learning a few months ago and decided to fiddle around with some of her suggestions and a few others we discovered online until we came up with our own working catapult. Trying to use rubber bands and ribbon was too complicated for me, so we decided to just use the hot glue gun! 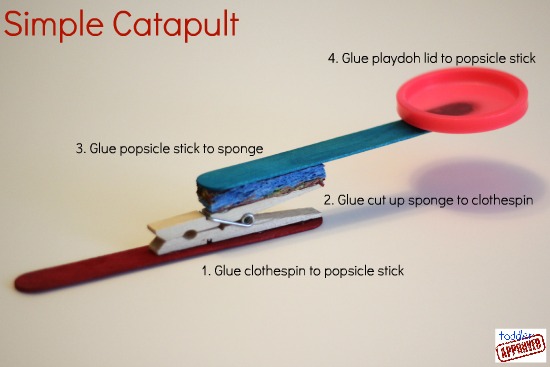 * The glue gun portion of this project was a “mom-only job.” If your kids are older and competent with the glue gun, you can have them help.
Once our catapult was created, we had to make the Animal Olympics participants. I love to keep bottle caps, so we dove into our recycling cupboard and grabbed some bottle caps and covered them with animal stickers. This was my toddler’s favorite part! My preschooler would peel the stickers off and hand them to her… and she would help stick them onto the caps! While we created these we talked about the animal names and sounds. My 4yr old son loves teaching his little sister all of the correct names and sounds and asking her to repeat him. Once we had the Animal Olympics participants ready, we used three bendy straws, scissors, tape, and some paper scraps to create our own high jump.

By snipping up the ends of the straws and fanning them out, we could tape them flat onto the scrap paper. Then we bent the straws and wedged them into one another to make our mini high jump. 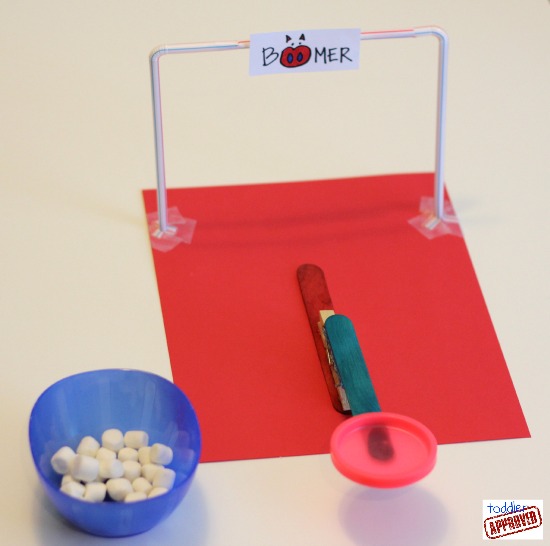 We started out the Animal Olympics by seeing if we could successfully launch some marshmallows over the high jump. My preschooler would launch them and my toddler would run around and find them and eat them… so it was quite an entertaining (and yummy) activity!

After some practice, we gathered up the real Animal Olympic contestants to start the Olympic Games! It was so fun to watch my son experiment by positioning the catapult in different places to figure out how to best launch the animals over the high jump. At the beginning he failed again and again at getting any of the animals over the high jump (just like Boomer!)… but as he persisted and experimented more, he figured out how to make it work. He was so proud of himself!! 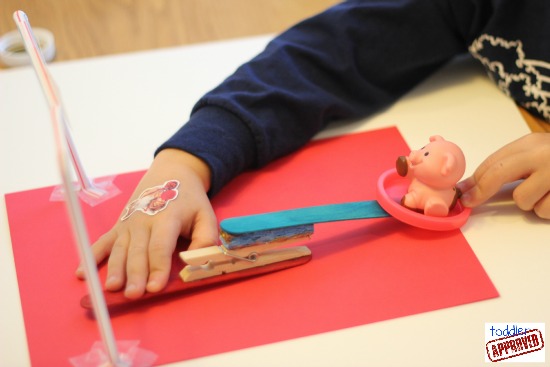 Later on we even tried launching some of our Little People animals. We had some great conversations about weight and size and shape and how that makes a difference when using the catapult. We also made predictions before each launch to try and determine which animals would make it and why… and how high they would go.

Overall this has probably been our favorite Olympic activity we’ve created so far! I hope you enjoy it too.

Kristina is the author of ToddlerApproved, where she helps parents capitalize on teachable moments in everyday life and motivates them to discover, create, and learn with their children. She is a mom of a toddler and a preschooler (and has a baby on the way!) and is a former Special Education teacher who is constantly learning how to adapt to and enjoy the developmental milestones her children hit. When she’s not crafting, Kristina runs a Mommy & Me book club, volunteers at her son’s preschool, throws kid’s craft parties, and travels with her family. Kristina tweets as @ToddlerApproved and can be found on Facebook and Pinterest.

Marie is a mother of 3 living in Seattle, WA. She's been the founder and managing editor of Make and Takes for the last 13 years, curating a DIY website with kids craft tutorials, home decor ideas, and simple recipes. As well as the author of the book, Make and Takes for Kids. Marie graduated with an Early Childhood and Elementary teaching degree and is currently teaching 1st Grade in Seattle. She loves sharing her creativity here at Make and Takes! 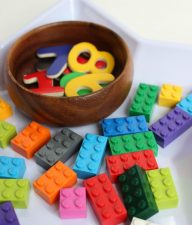 With the Kids Lift-the-Flap Name Craft for Young Learners 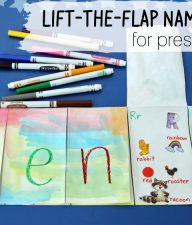 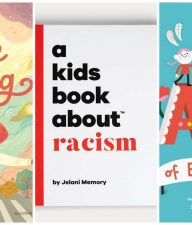 With the Kids 9 Homeschooling Ideas for Your Little Ones 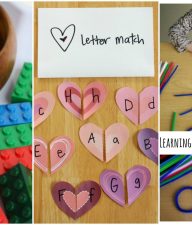